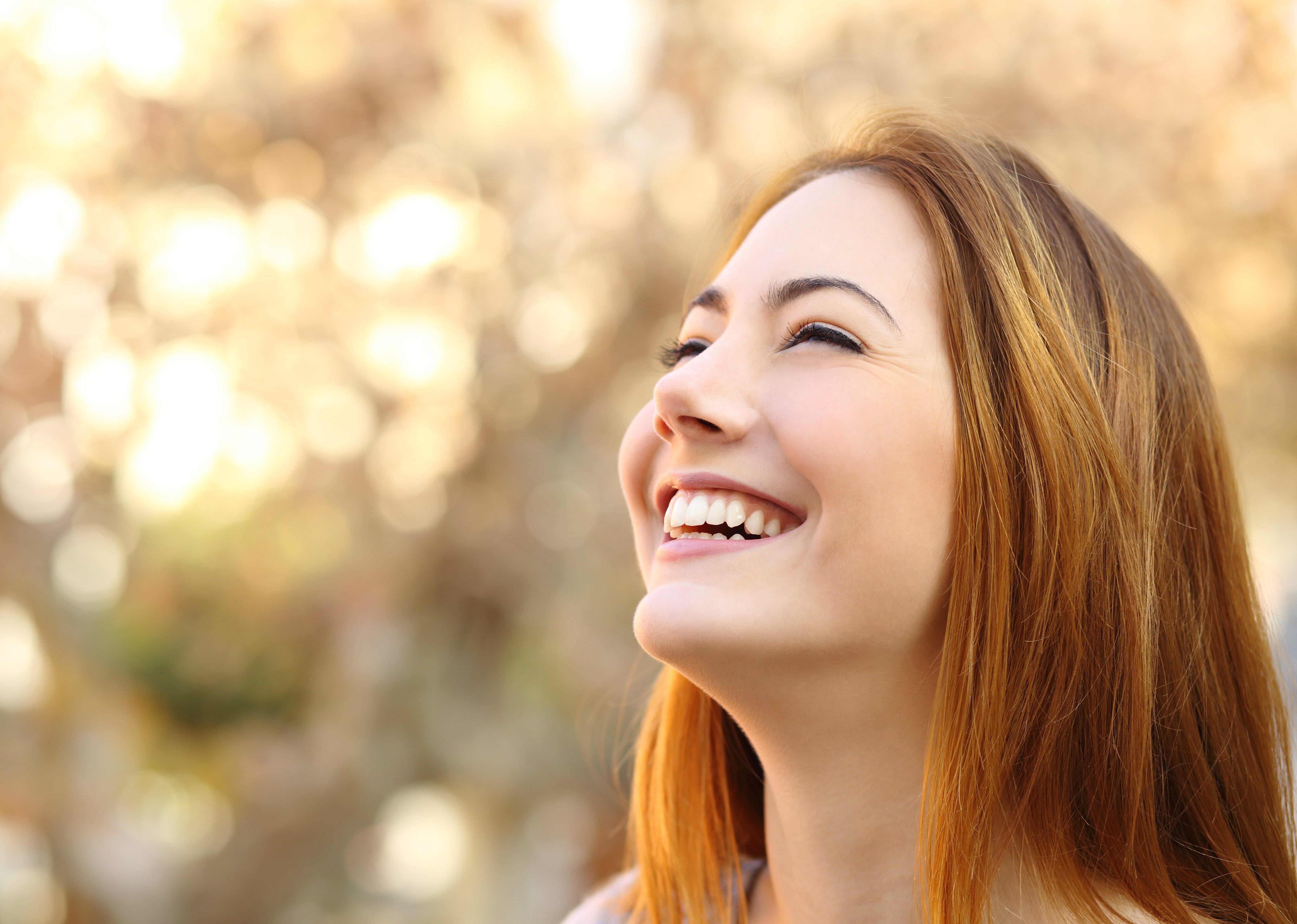 Have you heard that the dirtiest place in our body is in our mouth?

In fact, more bacteria live on the back of the tongue than on any other part of the body. – Dr. John Richter”.

Having healthy gums and teeth is therefore essential to good health.

What the scientists have to say… 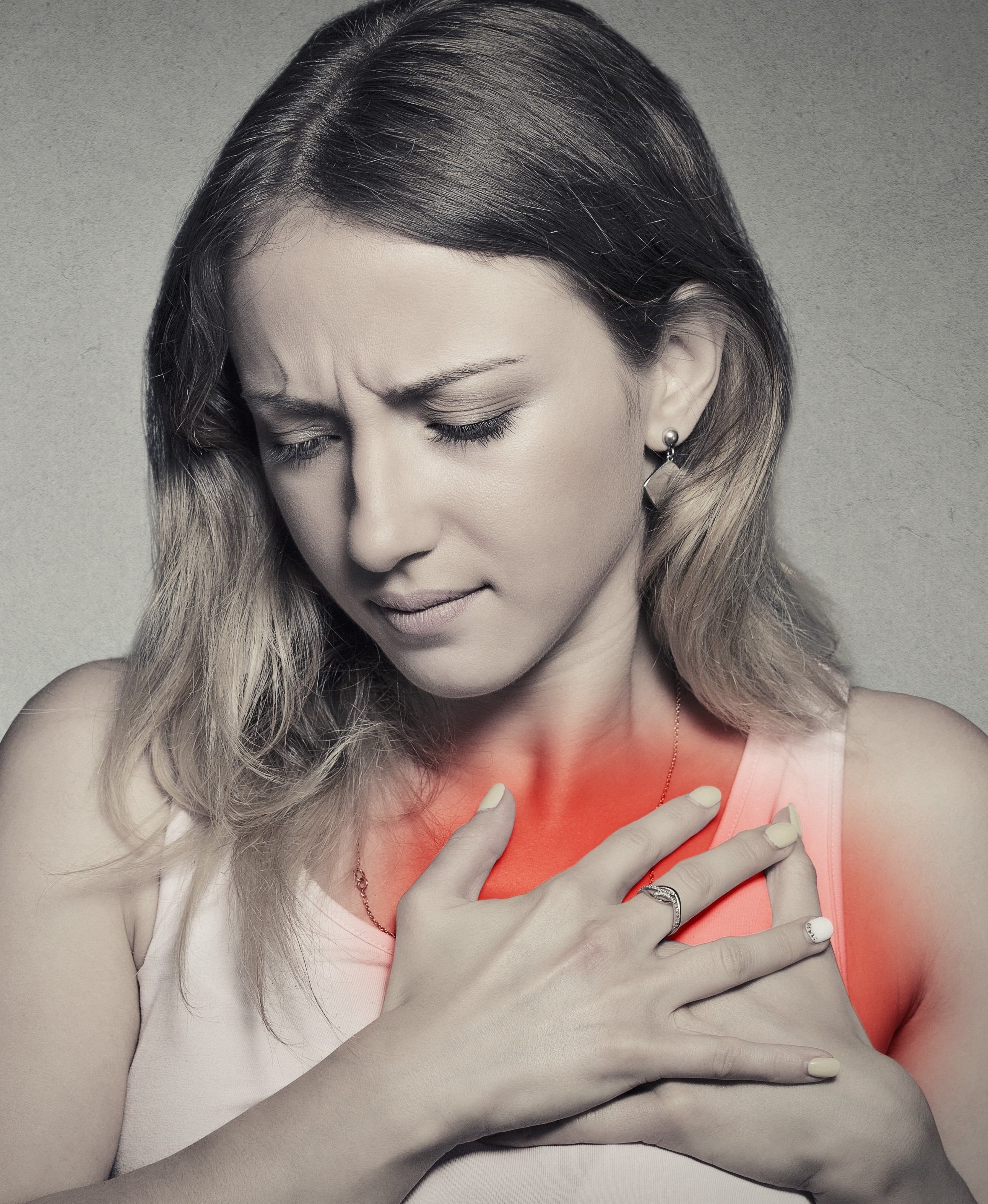 If you suffer from gingivitis (gum disease, characterized by bleeding of the gums), you are at higher risk of cardiovascular disease and stroke, according to Dr. Louis Rose, University of Pennsylvania.

This is because the same bacterium that causes gum disease (Porphyromonas gingivalis) also contributes to inflammation of the arteries, which in turn leads to heart and vascular disease.

And if you have excessive plaque build-up(which is basically bacterial buildup), you are also at higher risk of cancer, according to a Swedish study.

Your 3 steps to better health

At a recent trip to the dentist, I was thrilled by every word that came out of his mouth! He said to me:

When I first met you, you were heading towards gingivitis. Now, your gums are the healthiest I’ve ever seen them.

They’d even improved from my last visit 6 months ago. So what’s changed in the last 6 months? It’s a 3 part process:

Let’s take a look at each of those steps, and why they are so important… 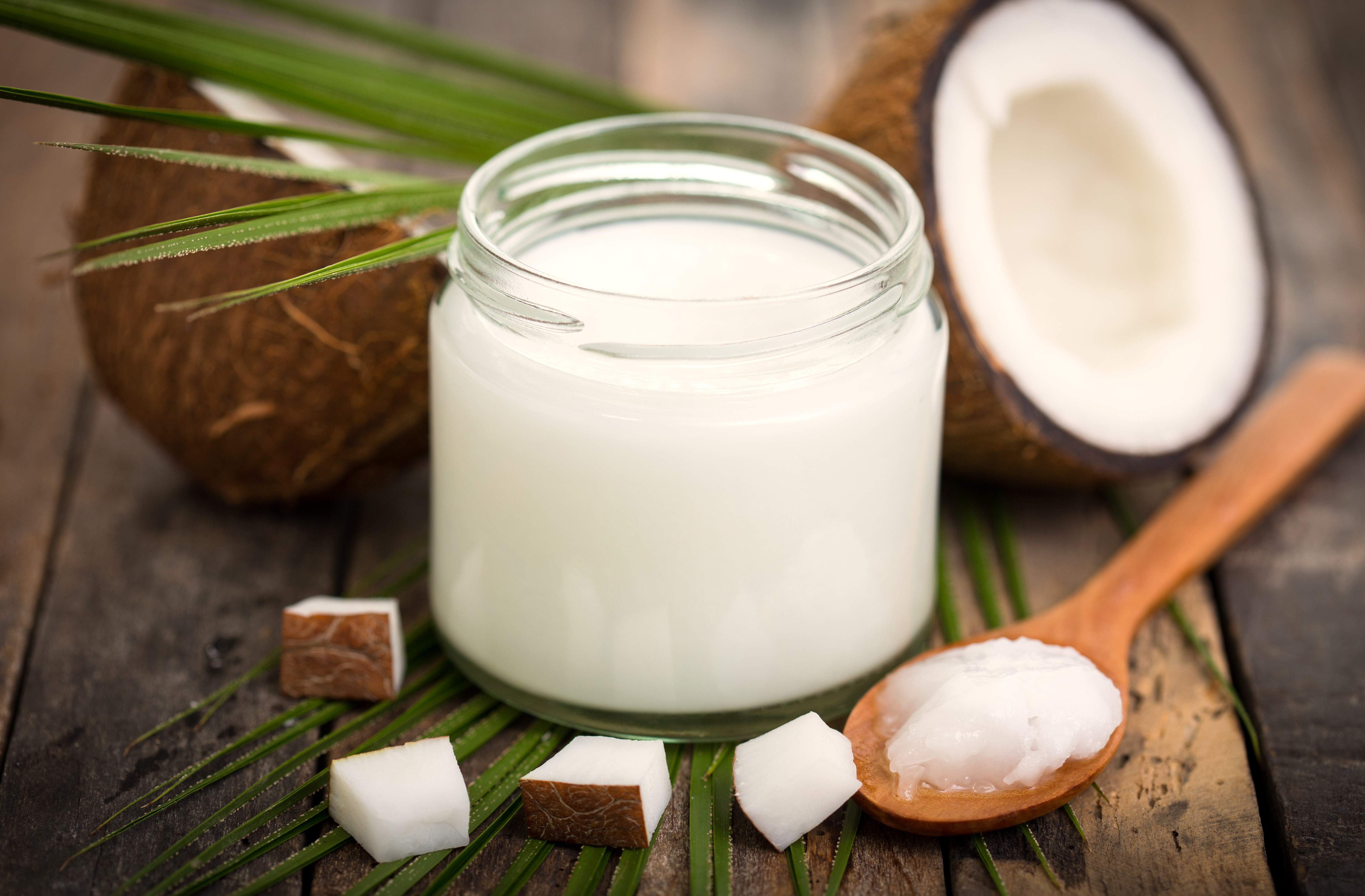 Coconut oil contains lauric acid, which kills bacteria, viruses, fungi and other harmful organisms. It has also been shown to increase HDL, our good cholesterol, and to enhance the pancreas’ ability to secrete insulin.

Add 2 to 3 drops of Oregano oil to 1 tablespoon of liquid coconut oil, and swish that around your mouth for 5 to 20 minutes, then spit it out.

Oil pulling is best done in the morning, prior to eating or drinking. I like to do my oil pulling while I’m in the shower each morning – it’s a great way of multitasking!

Handy Hint: Because coconut oil solidifies in cooler weather, you may need to gently melt it on low heat on the stove. 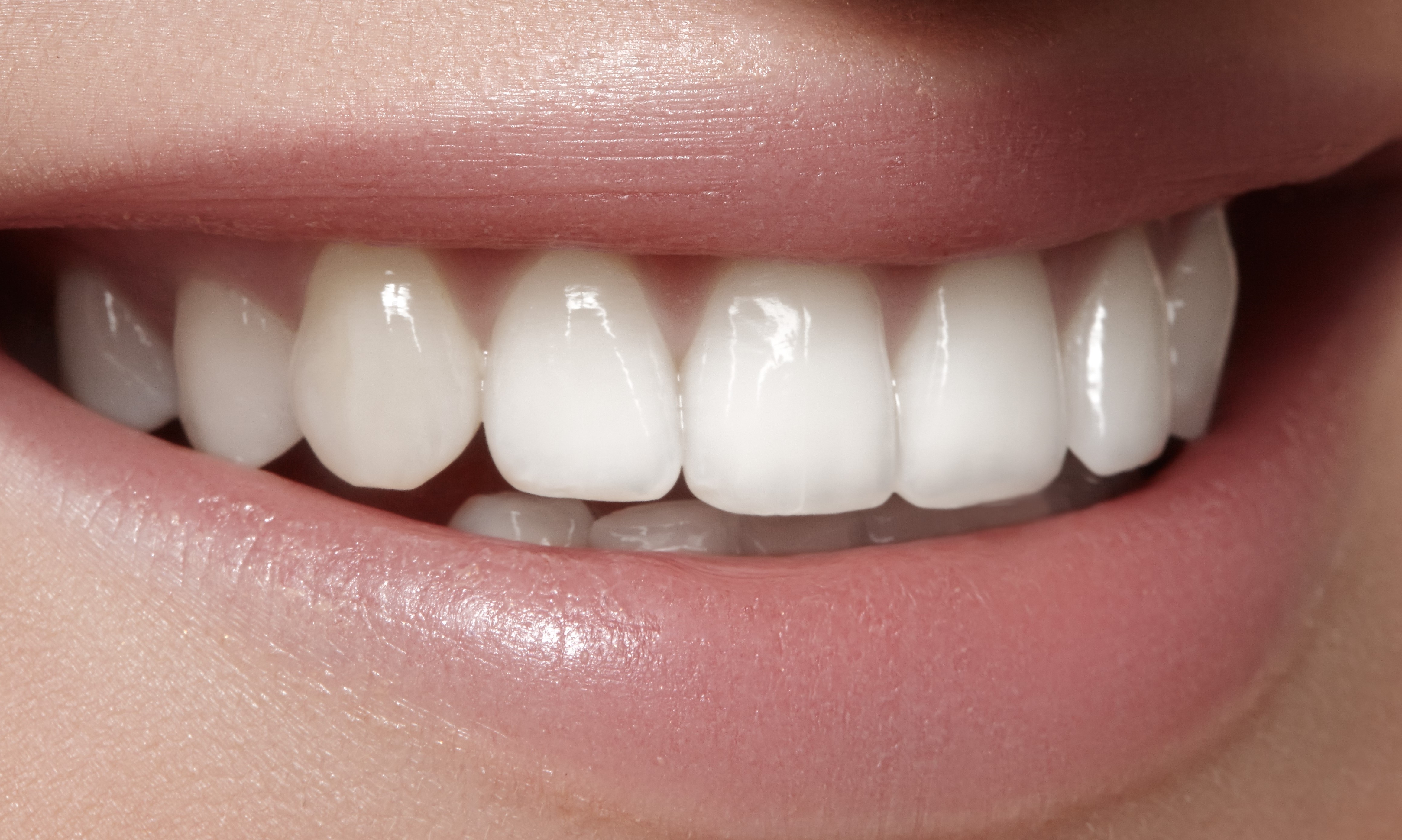 The process of swishing coconut or sesame oil around your mouth attracts bacteria, fungi, parasites and viruses that live in the various cavities in the mouth and the surrounding tissues and lymph. This is why you want to spit it out, not swallow it. Don’t spit it down yourtoilet either, or the oil may build-up over time.

The enzymes in your saliva helps to “saponify” and emulsify the oil, binding all these nasties into the oil, and helping to clean the mouth and reduce the buildup of plaque (1).

The lipids in the oil also help to pull toxins, mucous and bacteria from the mouth, sinuses and lymphatic system.

A triple-blind study (2) found a significant reduction in the levels of Streptococcus mutans (the bacteria responsible for tooth decay) in both the plaque and the saliva after 1 to 2 weeks of oil pulling for 10 minutes each day.

A 2007 study (3) found thatpeople who did 8 to 10 minutes each morning of oil pulling using 10 to 15ml of refined sunflower oil showed a significant reduction in their levels of plaque and gingivitis.

In yet another study (4), oil pulling was found to be equally effective to chlorohexidine mouthwash in reducing bad breath and the organisms that cause bad breath. Because it offers such a thorough cleanse to your mouth, oil-pulling also helps strengthen gums and remineralise your teeth!

You could use any Young Living culinary oil (Australia) or Vitality oil (USA) to flavor yourcoconut oil, however I like Oregano oil for its powerful emotional and breath-freshening benefits.

What better way to start the day? It invigorates our body and our senses, including our taste buds. It also promotes clarity of thought.

Oregano is an oil for emotional release. Its strong aroma helps us release unhealthy attachments, and the need to be right. It also helps us to release negative thinking, and to relax into the flow of life.

This biblical oil was known to the Greeks as “Joy of the mountains” because of its powerful ability to banish negativity and inspire strength and optimism. In fact, newlyweds in Greece were crowned with dried oregano in order to bless their marriage.

Never heard of a Waterpik®? It’s a way of flossing your teeth with water, instead of string floss.

As with string floss, it’s been clinically proven to reduce gingivitis and improve gum health. It cleans off the excess plaque that can make your teeth yellow, but unlike many whitening treatments, it does this without causing tooth sensitivity.

It also helps remove the plaque and bacteria that live below the gumline and cause bad breath, and is more than twice as effective as string floss when it comes to cleaning implants. (5)

I love the massaging effect it has on my gums, especially when I use warm water in the Waterpik. It was my dentist’s suggestion that I add 1 drop of Thieves essential oil into the water when I water floss, as a way of keeping my breath fresh and my mouth super-healthy!

Thieves essential oil is a blend containing Clove, Lemon, Cinnamon Bark, Eucalyptus radiata and Rosemary oil. It was inspired by a blend of herbs, spices and oils that were used in the 15th Century by a band of thieves. Google the Four Thieves Vinegar – it’s a fascinating story!

Studies conducted at Weber State University in 1997 show the effectiveness of Thieves oil when it is diffused against airborne microorganisms.

One study showed a 99.3% reduction in the number of gram positive Micrococcus luteus organisms after diffusing for 20 minutes.

Another study showed a 99.96% reduction in the number of gram negative Pseudomonas aeruginosa bacteria after just 12 minutes of diffusing. So you can see that Thieves oil (and in fact many other oils) are great oils to use in your diffuser, to purify the air that you are breathing.

So you want to floss at least several times a week, and preferably every day….and if you are not using a Waterpik, make sure you are using a healthy string floss (or better still, do both!). You definitely don’t want to be using commercial floss!!!! 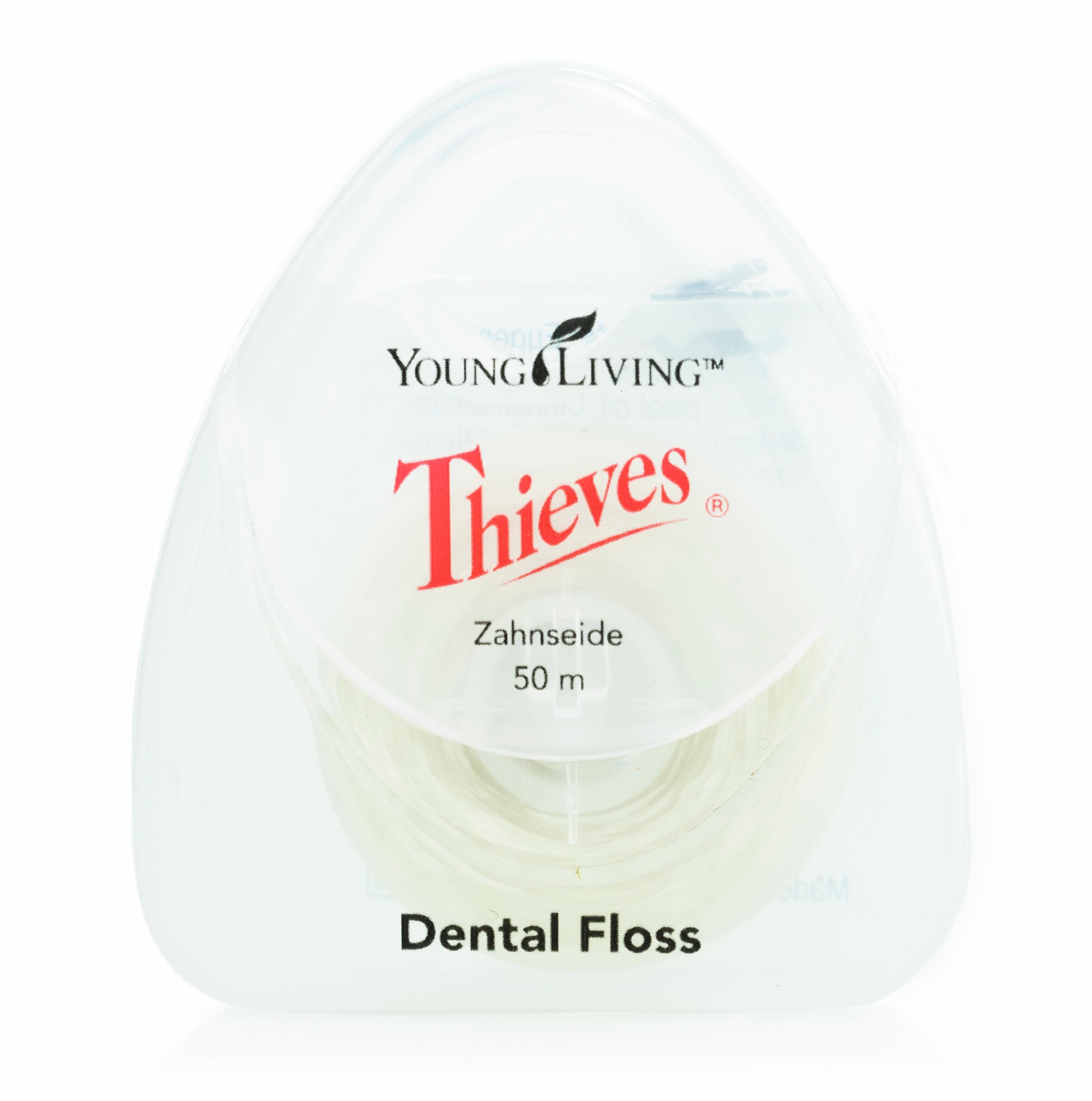 Most commercial dental floss contains petroleum-based dyes, artificial sweeteners, and is coated with Teflon, so it slides between your teeth easier.

Young Living’s dental floss is all natural, and uses bees wax and soy wax, and it is soaked in Thieves oil.

It’s the healthiest way to string floss, and a “must” for the handbag or briefcase for those times you find yourself with a stubborn piece of food caught between your teeth! 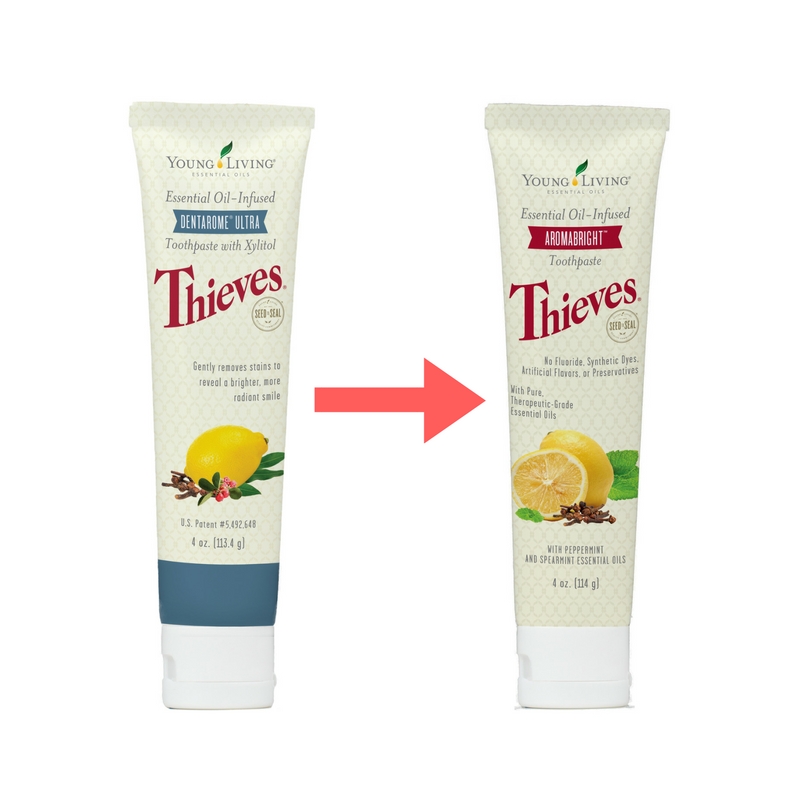 Now, I confess I used to be a die-hard Dentarome Ultra Toothpaste user. It is an essential oil-based toothpaste from Young Living, which contains:

But then I took advantage of Young Living’s Christmas special and ordered a 5 pack of small Thieves AromaBright toothpastes…so I started using those. I noticed they were a little sweeter than the Dentarome Ultra (this sweetness just being due to the extra stevia leaf extract), and a milder taste due to the absence of Wintergreen oil in it.

The advantage of Young Living over commercial toothpastes

The problem with many commercial toothpastes is that they contain large abrasive particles that erode the tooth enamel. Loss of enamel is permanent, and once it’s gone, the softer dentin layer is exposed, greatly enhancing the risk of dental decay.

So you want your toothpaste to have extremely fine particles – large enough to remove the plaque biofilm, but not so large as to create damage to the enamel. This is what you get with both Dentarome Ultra, and Aromabright toothpaste. 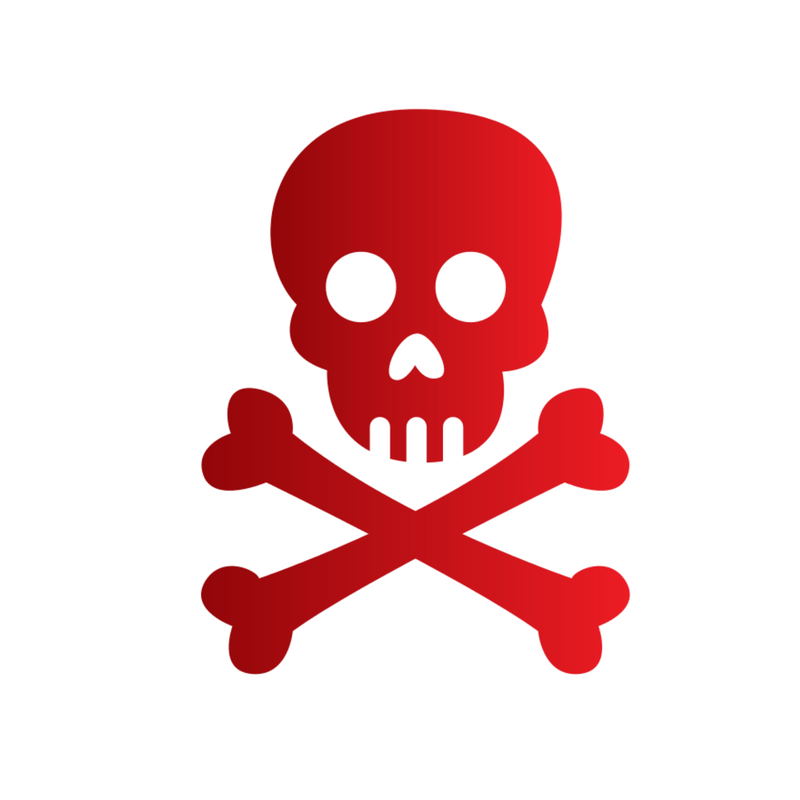 If you buy a tube of Colgate® or other commercial toothpaste in the US, it will usually contain a warning on it like:

“Keep out of reach of children. If more than a pea sized amount is accidentally swallowed, get medical attention or contact a poison control centre right away.”

I love the Young Living toothpastes because they are completely free of all known harmful ingredients.