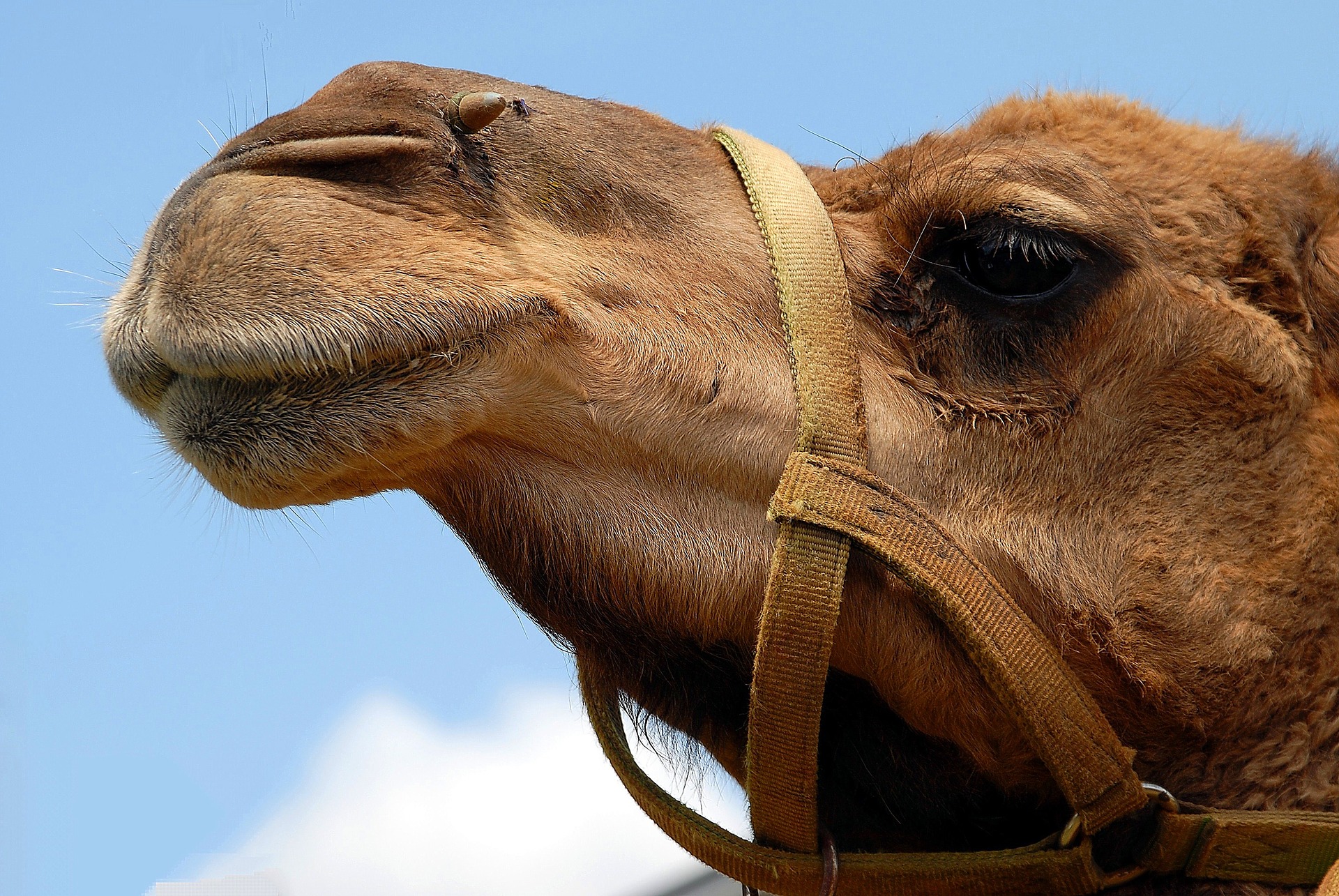 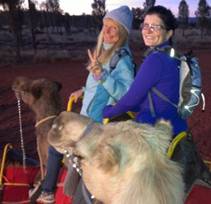 I want to share one of my favourite stories with you – about a camel that I performed an emotional clearing technique on, with amazing results!

This is a long story, but a wonderful one that will warm your heart! Enjoy!!!! It all starts with a Camel Ride in Uluru, Australia’s Red Centre. A number of years ago, I was blessed to visit Australia’s magnificent Uluru (previously known as Ayer’s Rock).

On one of the final days, I took a sunrise camel ride with some of my Young Living friends. This was definitely one of the highlights of the week.

As we were carried along on our fearless steeds, one of the guides shared with us about the camel “Oprah” who was riding behind my camel.

Oprah had been groaning when the humans climbed onto her back, and apparently this “unhappy” vocalisation had started just a year ago, when Oprah had given birth to a stillborn calf. Ever since, she’d been obviously unhappy and emotional.

I immediately thought of Emotional Clearing Technique, so when we finished our ride, I asked permission to apply some oils to Oprah. I chose to apply some Valor and some Trauma Life oil. She seemed to accept the oils quite peacefully, and (with prompting from my Young Living friends), I approached the owner to offer a full Emotional Clearing Technique for Oprah. To my absolute delight, he agreed, saying that several people had worked on Oprah over the past year, but with no significant change (unfortunately).

It’s a very lovely, simple process, based on a technique taught by Gary Young – an oil is anointed on the body, and several minutes later the next oil is applied, and so on until all the oils have been applied.

How do you work on a Camel?

I returned a couple of hours later, this time with my full kit of oils. I’d never worked on a camel before, but decided to approach Oprah in the same way I’d work on a horse. I began by putting my open oils case on one side of the fence, while I was in the arena with Oprah on the other side of the fence. My friends (Sharon, Andrew and Noel) were standing together, handing me the oils….and we started with Valor oil. I put 3 drops into my right palm, and bent down to apply it to Oprah’s rear right foot. Well, she got a surprise, and kicked out at me….and you’ve never seen me scramble so fast out of the way!!! A camel’s feet are pretty huge. She was fairly agitated, so we set her free to just have a wander around the arena.

Once she’d settled, I went over to try again. Her owner said to me that camels can smell water from 20km away – in other words, they have an amazingly powerful sense of smell. Oprah is also uncomfortable around people she doesn’t know.

The combination of my open oils case (very smelly to a highly smell-sensitive animal), and my friends gathered so close, seemed to be what contributed to her reaction.

After Oprah had settled, I walked up to her again. This time we were some 10 metres away from my friends and the oils case, and that seemed to work better. This time I stroked her from her throat down to her front right leg, helping her get used to my touch, before I then applied Valor to her front right foot. Normally for a Valor balance I’d have one of my hands on each of her feet (normally rear feet, but this time I felt front feet would allow her to see me better, and not be so skittish). But – because of her previous reaction, I opted to take care of my own safety, and balance one of her front feet at a time. 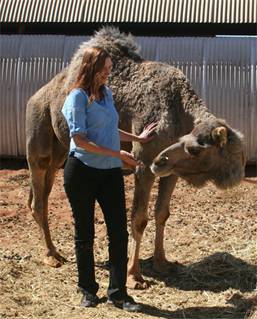 After that came 5 drops of Harmony oil – dripped approximately up the chakras (on her back). And then two drops of 3 Wise Men oil, applied onto my fingers, and then rubbed on her crown.

She was still a little skittish, but was quickly calming with the effects of the oils. I completely forgot to apply Present Time (normally I would have applied 1 to 2 drops to her thymus).

So the next oil was Inner Child, which was to be applied to her navel. I crouched down to look for her navel, and there it was, this furry mound under her belly. Before I applied the oil, I decided to stroke her there, just to make sure she was comfortable with me touching her belly. She stood there very calmly as I did this. So here’s where things got interesting.

I applied a couple of drops of Inner Child to my fingers, and bent my head down to look under her belly, making sure I applied the oil directly to her navel. WOW!!! Before I knew it, she’d “boofed” me in the head with her head. It was camel language for “What the !@*@*! are you doing to my belly!!!!!” 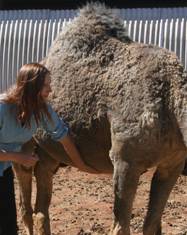 Instead of moving away, I looked at the situation. That had been an extremely strong reaction from her….not to me stroking her navel, but to the oil application there. It’s been my experience during emotional clearing that often one out of the 13 or so oils I might apply will cause a significant “shift”.

Oprah had just had a “shift” – in the form of alarm, or anger, or strong emotion. I thought about this. Inner Child connects us to our inner child, and the navel is where we are connected to our mother via the umbilical cord.

I could see that Oprah’s emotions were activated at this point, probably to do with the stillborn calf. So I put my hands on her, and “felt” into her. I let my mind still, and followed where my thoughts took me. I let my mind travel into the vision of her stillborn calf. I could feel her distress – but to my surprise, it was less around the birth of her dead calf, and more around the fact that the calf was taken away from her too soon.

She had been unable to complete the process of saying goodbye

This was the pain she was holding on to, which prevented her from moving on. I sensed that she would have liked several days with her calf, to really come to the point of accepting the death.

Later I spoke to the owner about this, who confirmed my senses. In his own words, it was very upsetting to watch.

Oprah kept trying to revive the calf, for several hours after the birth, until they eventually took the dead calf away from her. And after they did that, she cried and moaned for days, with tears rolling down her face, so that even grown men had to walk away it was such an upsetting sight.

I was still holding Oprah as I had these thoughts, and I turned my mind to a beautiful visualisation. I wanted to help her transform the grief into letting go, or into something positive. So I imagined her belly growing big with a calf, a happy, healthy calf. And I imagined that she gave birth to this calf. I believe that when we are truly connected to another being, this power of visualisation can be very healing.

So here she was, and in my vision she’d just given birth to a calf….so I decided to “be” that calf. I crouched down beside her, making myself the height of a calf, and I looked up at her (as a calf would do). My intention was that I was her calf, and I loved her.

Well, she lowered her head to me, and I kept myself very still. And she planted a big kiss on my lips!!!!! I felt her love. In that instant,
I was the calf she had not had. 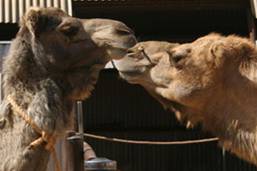 From that point forward, some amazing things began to happen….I stood up after a few minutes of connection and applied the next oil to Oprah. This was 3 drops of Release oil, applied over her liver. Another camel (from a different

arena) came over to where Oprah was standing and put his head against hers.

They stood quietly together, until the owner led the other camel away.

That camel had been bullying Oprah several days previously, and the owner was concerned that he might disrupt her session if he became aggressive again. What was interesting was that Oprah became quite unsettled when the other camel was led away….and I strongly felt that they had been in some silent communication at the time (which had been interrupted).

I want to say here that Oprah’s owner, Mark, is an amazing man, running an incredible company. I love horse riding, and have done many trail rides in the past. I’ve never come across a company that loves their animals the way that this man (and his company) loves and protects his animals. Mark was intent on doing the right thing by Oprah, every step of the way.

Once Oprah had settled again, I continued with the treatment as follows:

What goes around, comes around 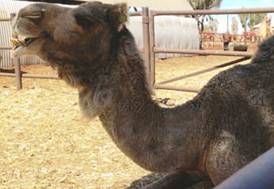 So here I was, after an hour or so, and we’d reached the end of the technique. Oprah was in a very “still” space, and I felt to give her some space, so I slowly walked back to the fence where my friends were.

One of the handlers, Lauren, came and undid Oprah’s halter, and I fully expected Oprah to wander off in her own space….but no, she walked straight over to me, and my friends, and my oils case.

This was a complete contrast to the beginning of the session. She found Noel, and pushed her rump up to him (and I knew she wanted him to scratch her). So he became “official camel bum scratcher” for the next ten minutes.

As he was doing that, Oprah turned to me. And she faced me front on, with her eyes gazing into mine, and I “felt” her gratitude, and I “felt” her wanting to give back to me (in thanks). I had only a few weeks earlier gone through the distressing death of a horse…..and I felt that on some level Oprah could sense my residual upset, and wanted to help me.

So I stood with her like that for ten minutes, allowing her love to flow over me (as it was flowing to my friends).

Eventually she sat down, and we slowly bid our farewells. But she had touched us in a very beautiful way. All that night, every time I woke up, I kept feeling like I was with her, and bathed in love. And even Noel commented that his impression of camels had totally changed. He’d thought they were cantankerous creatures, and instead found out that they have hearts of gold and are truly beautiful beings.

The Results of the Technique

So – the final question is “Did the Emotional Clearing Technique help Oprah?” I knew in my heart that it had. We cannot have something so profound and so spiritual occur, and not be permanently touched by it. A few weeks later, I managed to catch up via email with Lauren, who was the handler who’d helped us on the day. She wrote:

“Greetings Artemis, This is Lauren. I’m writing in regards to Oprah. She is still showing signs of improvement. She is not screaming as much as usual which is a big improvement and she seems to be getting along with the other camels much better. I just wanted to let you know that Oprah is doing great! Hope all is well for you and again it was great to meet you all. Thanks again and will be in touch soon. Kind regards, Lauren”