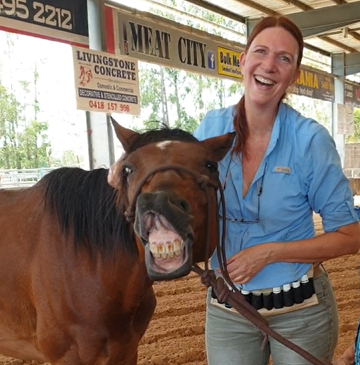 I’ve had a love affair with Raindrop Technique that’s spanned two decades. I was present at Gary Young’s famous Dallas Raindrop Technique training in the year 2000, when 1100 people flew from all over the world to learn this amazing technique. I was so impressed by what I saw that I began integrating Raindrop Technique into my private practice, and soon it became my primary bodywork modality. I’ve performed it on people and animals, all the time with amazing results.

It was with a very joy-filled heart that I attended the Raindrop Australia equine Raindrop Technique practitioner course that took place in Brisbane last weekend. This course has been created by my sister, Susan Marshall (in the red shirt, next to me in the white shirt).

It was wonderful to hear Susan’s experience of working on horses. 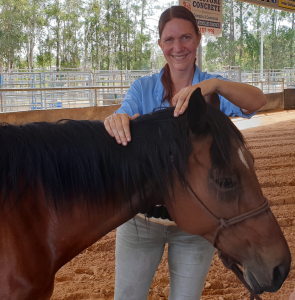 So for one of my practicals in the course, I was given a rescue horse to work on. “Jules” was rescued from a “starvation paddock”. I’d never heard the term before, and was saddened to hear that in the severe drought and heat that’s been occurring in Australia, some horse owners are choosing to leave their horses in their paddocks to die – with no grass or supplementation. They slowly starve to death.

I approached Jules with some Harmony oil (one of my favourites for saying “hello” to a horse)….and was interested to note that Jules sniffed the Harmony only from her right nostril. Hmmm, possibly a physical need, more so than an emotional one. That would make sense…no one was there to beat Jules. She was just neglected, and left to fend for herself in a barren landscape.

As I tuned into her, I could feel the tension she was holding around her sacral area, and knew that was one area I wanted to work on.

So then began the Raindrop Technique. First, the Valor balance on the coronet bands of the rear feet, just above the hoofs (see left pic). Then Vitaflex down the inside of each rear leg (just behind the cannon bone) – see middle pic. As with humans, we do this with Oregano, Thyme, Basil, Cypress, Wintergreen, Marjoram and Peppermint, 3 runs of VitaFlex with each oil down each leg, alternating sides. With horses, we also VitaFlex around the coronet band on every run (see right pic). 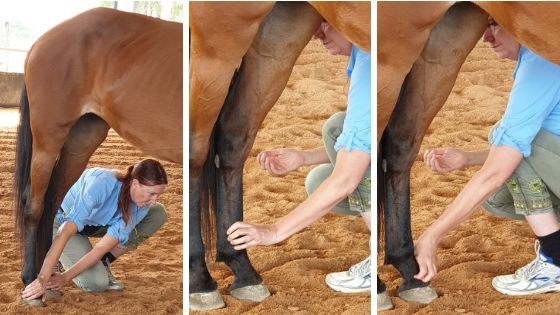 Then came the moves on her back. The oils were dripped up the spine all the way to the top of her neck, then lightly feathered in using a technique inspired by Native Americans, where the hands lightly float over the back like a feather, carrying the oils up the spine and fanning out to either side.

Often horses find Basil to be a particularly hot oil, so Jules started getting fidgety after the Basil oil went on, and I lathered some V6 vegetable oil blend over her back to reduce the prickliness of the first few oils.

Next came the “basil circles” – a massage comprising small clockwise circles performed on the erector spinae muscles up each side of the spine. Naturally we need to be attentive to their sore spots, as they are quick to let us know if our massage has pressed one of those spots.

I’ve learned that horses love the “basil circles” massage, especially if it’s performed with a lot of strength from our fingers. You can see below how Jules is leaning into me and stretching as I did this movement on her neck.

It was extraordinary to watch her start energetically “releasing” through her jaw and mouth. 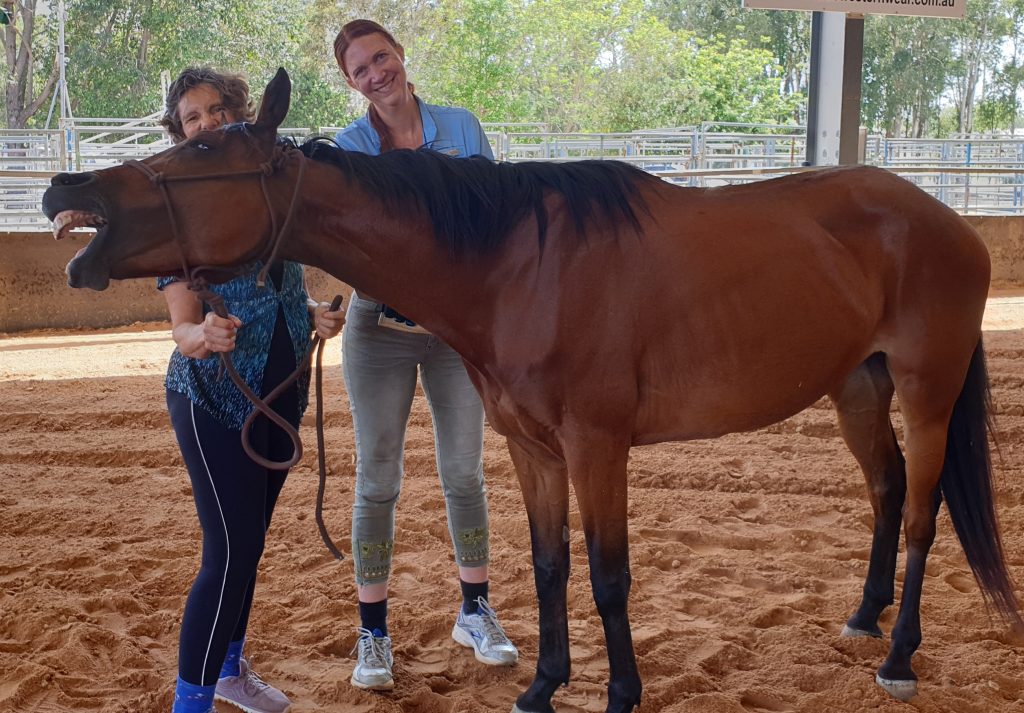 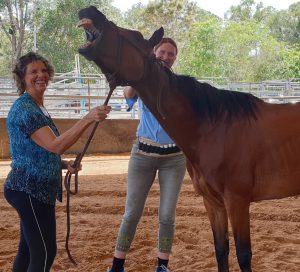 As I worked up her neck with each run of Basil circles, she started yawning and yawning, and exhibiting a phenomena called the “Flehmen response”.

The Flehmen response happens when a horse pulls its upper lip back (as if it’s smiling), and draw air over its lips. This helps move compounds into its vomeronasal organ (VNO), a mucous membrane with high blood supply which sits under the floor of the nasal cavity. From here, signals are transported to the limbic region of the brain, where emotions and memory are stored. 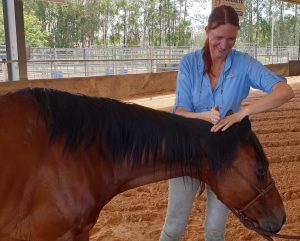 Jules did the Flehmen response over and over again, interspersed with powerful yawning. It was so beautiful to watch her responding so overtly to the session.

Next came Cypress oil, feathered up the spine, then the massage step called the Finger Straddle (which has a sawing motion up the back and neck – as pictured here on the left).

Then I added Wintergreen oil, feathered up the spine, followed by VitaFlex Thumb rolls.

These 2 moves are a little tricky to do on a horse if you’re shorter in stature, so there is a way you can modify this technique if needed. However, I’m fortunate to be 6 foot 2 (188cm), and Jules wasn’t a large horse, so I was able to perform the VitaFlex thumb rolls on her the same way I would on a human, just changing the direction of my body when I get to the neck of the horse.

It was wonderful to watch how much Jules loved this step as well. Each time I came to her neck, she dropped it down so I could more effectively work on her, as you will see in the picture above.

And when I did the Vitaflex Thumb rolls, this video below show you her response…..if you listen carefully, you’ll hear me say “Did you enjoy that?” and then watch her big smile for the camera!!!

The Raindrop Technique was then completed with Peppermint oil up the spine, feathered in, then Valor oil over the sides of the body, and feathered in.

I then applied some beautiful Harmony oil blend up her back, and did some “gratitude circles”, which is a step that one of our Raindrop Technique teachers came up with as a lovely way to set an intention at the end of the Raindrop Technique. 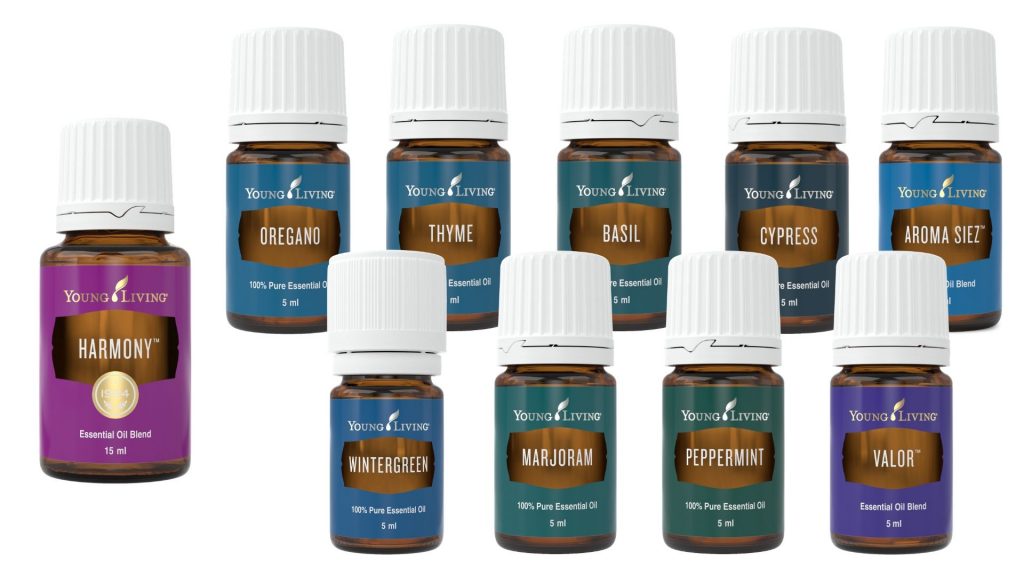 Raindrop Technique (and Egyptian Emotional Clearing Technique) are such wonderful tools to have up our belt, to help humans and animals during times of challenge and need. Jules had been through such a difficult experience, and in the hands of a loving human is now on the way to regaining her weight. Yet I know that she felt the love I poured into the session, and would have received enormous physical and energy support from the oils in Raindrop Technique.

Being able to touch and change animals’ lives in this way is one of the joys in my own life! And a huge thank you to Sandy Jones who I partnered with for this Raindrop Technique, and who held Jules while I worked on her. While I was giving Jules love through her body with the oils, Sandy was whispering love into her ears and mind.

If you’d like to get your own Raindrop Technique kit so you can bless your human and animal friends, you can order it through your Young Living account, or else contact the person who introduced you to Young Living or to our essential oils bulletin for their assistance. They will also be able to guide you towards the best courses for you. If you are not sure who that is, please contact us for assistance.

If you live in Australia and would like to learn Canine or Equine Raindrop Technique at a practitioner level (allowing you to obtain professional insurance cover for working on dogs and horses), please contact Raindrop Australia for more information.