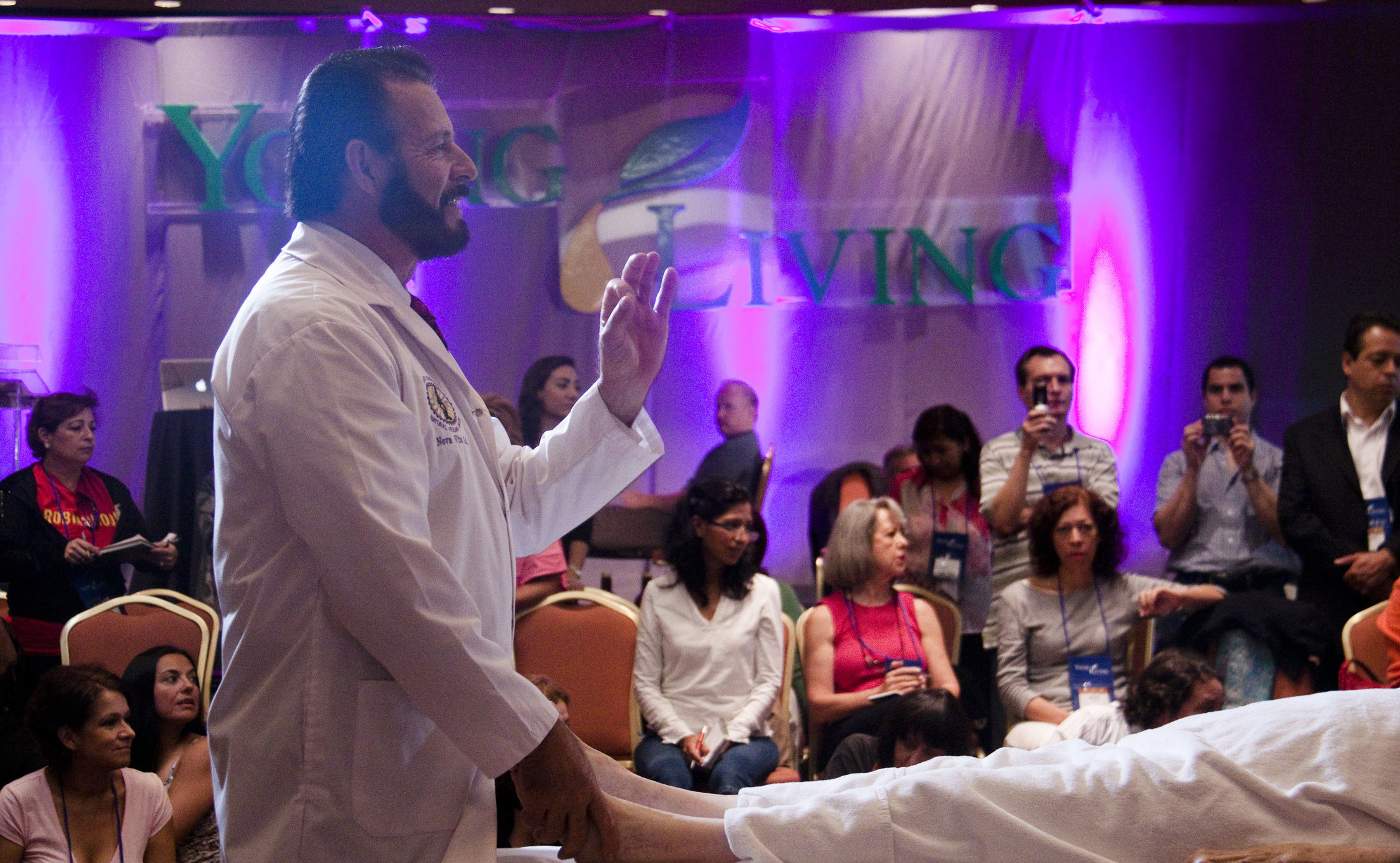 Imagine the sensation of sinking into a deep and blissful state of rest, as someone performs ancient Tibetan reflexology on your feet.

As you slowly (even reluctantly) some back to your body and roll over, you experience the gentle splashes as therapeutic grade essential oils are applied up to your spine and to your tired muscles.

These oils are then “feathered in” using a spine-tingling technique inspired by the Native Americans, combined with massage. You can’t get more pampered than this!

The VitaFlex Technique is an Ancient Tibetan form of reflexology. Back in the early 1900’s there was an amazing healer and chaneller called, Stanley Burroughs.

Like Gary Young, he was a visionary, and pioneer, and his visions brought 3 wonderful modalities to our world.

The word “VitaFlex” stands for “Vitality through Reflexes”

It is a pressure point massage technique that works on the concept that by stimulating one part of the body, we can influence another part of the body through energy channels or meridians.

According to Tom Woloshyn, long-time student of Stanley Burroughs and author of The Complete Master Cleanse, “The word reflex is derived from reflexive, meaning “to direct back onto one’s self”. A person who does Vita-Flex is activating the inborn system of bodily reflexes to correct or balance the body by its own natural means.”

The technique itself was channelled by Stanley Burroughs around 1928/1929.

He told Tom Woloshyn that he saw himself, in his mind’s eye, performing this reflex massage on a person. He could even see charts of various reflex points for the entire body in that vision

When Stanley later connected with some Tibetan lamas, they recognized the technique he was performing, and they told him that people in Tibet practiced this technique more than 5,000 years ago….and probably still do today. VitaFlex Technique even pre-dates acupuncture.

It’s designed to balance and energise the entire body, and the complete VitaFlex technique works from the knees to the ankles, and all over the top and bottom of the feet and toes.

The VitaFlex movement can also be performed on other areas of the body, including the arms, hands, scalp and shoulders.
In Healing for the Age of Enlightenment, Stanley Burroughs says about VitaFlex that, “Its beauty is that it works on the entire body, and it’s so simple – it does no damage, people can learn it themselves, and treat themselves.”

Stanley believed in empowering people to be healthy, rather than having them put power in a system that was focused on the principles of sickness, not health.

Differences between VitaFlex Technique and Reflexology

In reference to this fourth dimension, Stanley says that:

Difference # 2
When it comes to activation points in the body, VitaFlex Technique recognises 5,000 reflex points in the body. In the early to mid 1900’s when Stanley Burroughs was practicing and teaching VitaFlex, Acupuncture was at that time only working with 165 acupressure points.

Difference # 3
VitaFlex Technique is also a much gentler movement than reflexology. Gary Young did some blood studies around
reflexology versus VitaFlex, and he found that where reflexology had the capacity to be so firm it could bruise or damage some of the red blood cells under the pressure site, VitaFlex technique was much gentler and didn’t cause this damage to blood cells.

Difference # 4
Vitaflex Technique uses its own foot and hand map, which is slightly different to the one used by reflexology (which is pictured here).

Difference # 5
VitaFlex Technique also looks completely different to reflexology when it’s being performed. It’s very much a roll and release movement, similar to turning a doorknob. Let’s explore the movement itself in more detail….

How to perform VitaFlex Technique

Thus by rolling over and back in quick succession, you are generating an electrical charge or pulse along an energy pathway to a corresponding part of the body.

In his book Healing for the Age of Enlightenment, Stanley Burroughs explains the VitaFlex movement as follows. He says:

“It’s similar to the end of pipe wrench. The more you twist it, the tighter and more effective it becomes. As the twist continues to completion, and the finger is completely bent, the correct pressure occurs with the end of the finger maker the contact.”

All this time the hand remains firm on the foot or hand of whatever part [of the body] you are working on.

“The pressure is never “held”. It’s always released immediately, and then repeated from the beginning.

This can be done several times on the one spot to obtain the desired results. Since the movement is very fast, one will never stay more than a moment on any point, thus preventing irritation. Don’t rub any point, because this rubbing can damage the tissues. We’re not attempting to crush crystals which may or may not be there.

“Instead, we use the pipe wrench technique which is pressure, release, pressure, release. As the progress moves onto other parts, the hand moves smoothly and rhythmically without any jerks or jabs. It’s important not to jerk when performing VitaFlex, because this jerking can harm a person.”

How VitaFlex became the 2nd step of Raindrop Technique

Oooh – this is a really fun part of the story. Gary Young heard about the Master Cleanse when he was paralysed from a logging accident at age 24. Always being a highly active and physical man, life in a wheelchair seemed hopeless to Gary, and there were many times he wanted to give up. Yet Gary was very intuitive, and something had led him to the Master Cleanse and he decided to try it. Now, the Master Cleanse is JUST lemon juice, maple syrup, cayenne pepper and water…and NO food. However, Gary went onto the Master Cleanse, then onto alkaline soup broths, then back onto the Master Cleanse….and he did this for 258 days straight, without eating any solid food!

He felt so good on the Master Cleanse that it spurred him on to study natural therapies and to explore many different modalities, and some 13 after his accident, he had regained the ability to walk.

So did the Master Cleanse get Gary’s attention? Absolutely! And Gary also went on to study VitaFlex Technique with Stanley Burroughs, and he adapted it to become the second step of Raindrop Technique, after the Valor Balance.

Gary also began incorporating essential oils into VitaFlex Technique. He taught that the Piezoelectric charge generated with each roll of VitaFlex Technique was carrying the energy of the oils to the corresponding part of the body. I remember when I studied with him in the year 2000, he said that benefit of starting Raindrop Technique on the feet was that the body would become used to the oils before we transitioned to working on the back (which is Step 3 of Raindrop Technique, and which I will cover in our next bulletin).

Gary taught that much of the benefit of Raindrop Technique actually comes from the work we do on the feet with the Valor Balance and VitaFlex Technique, and their energetic action on the spine of the body.

So what does VitaFlex Technique on the feet feel like?

Hmmm….like Heaven, only better? Let me give you a visual….you are lying face up on a massage table, and you’ve just gone into a really deep state of relaxation with the Valor Balance. Then this beautiful, rhythmic, VitaFlex technique is performed along the inner edge of both of your feet, from heel cup up to your big toe. It’s perfectly balanced – not too light, not too heavy….just right. Three drops of 7 different essential oils are applied to your feet during this process, using oils that are physically stimulating like Oregano, Thyme, Basil, Cypress, Wintergreen, Marjoram and Peppermint.

This means that each point of your foot is stimulated 84 times (because each of the giver’s four fingers are stimulating that point with each run, ie. 21 x 4).

I know when I give VitaFlex Technique during Raindrop Technique, it sends the receiver into such a luscious state of relaxation that they are almost always sound asleep by the end of this step….ready for step 3, which I’ll talk about in next week’s bulletin.